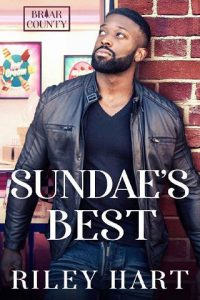 Grady Dalton is in a rut. He’s thirty-eight, without a boyfriend, and has yet to find the place that feels like home. The closest he ever got was his best friend, Nathan. But it’s been seven years since he passed, and life isn’t getting easier. That’s how he ends up in Briar County, hoping to grow roots in the place Nathan had loved.

Deacon Sharpe spends his days serving homemade ice cream at Sundae’s Best and his nights alone, pretending he’s getting by after his wife’s death better than he is. His world is rocked when a man shows up, claiming he’d been his brother-in-law’s best friend, and who seems to miss Nathan as much as Deacon misses Patty.

Their losses connect them, but soon, the weight of their loneliness eases with laughter, making ice cream, and Grady reminding Deacon what it feels like to be held again. Deacon tells himself it’s platonic. How can it be more when he’s forty and has never been with a man, never even been attracted to one. But then, he’d never felt those things about anyone other than Patty either. And when Grady touches him…kisses him…nothing else matters and the rest of the world melts away.

Together they can deal with family drama, small-town gossip, and Deacon’s newly discovered feelings. But as it often does, life has one more curveball to throw their way…

Sundae’s Best is a small-town, bi/demisexual awakening romance, with characters who like to be held, swoony moments, a dog named Moose, and lots of ice cream. Sundae’s Best can be read as a standalone.