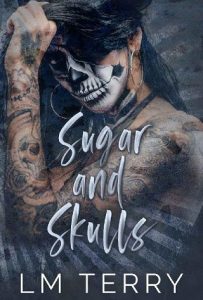 Jesse:
When I was ten I was a naïve, shy girl. A girl who dreamed of sunsets and roller skates. Until my grandparents died. Then I found myself alone in the world. One bad thing after another seemed to find me but I dealt. I dealt because a man with a black leather jacket and ink from head to toe told me how to survive this world. He told me sometimes you have to get mean. And so, I embraced my mean. I hated it at first but as time went on being mean became second nature.
I rule my world, staying ahead, never stopping. You won’t find anyone like me. I’m Jesse Miller and I’m one of a kind.
I’m fine on my own.
Fine.
Perfect.
Good.
Until, I’m not.

Dirk:
When I found Jesse at ten years old she was cute as a button and sweet as a jar of honey. I gave her a bit of advice to survive this world. I hated to be cynical, but she was in the foster care system. She needed to learn a little mean, otherwise she would be eaten alive.
Now, I’ve found her again and believe me, Jesse Miller isn’t a little girl anymore. Seems she took my advice to heart. I may have created a monster. She’s a dark-haired vixen with a wicked mind and sharp tongue. Jesse is very, very enticing.
She thinks she can do it on her own.
She doesn’t have to.She has a family.
A tribe.
Me.
She has me.