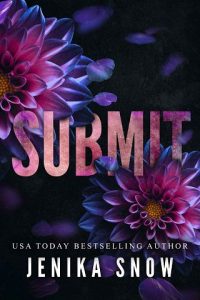 Blythe Winters dream had always been to dance. But after an ankle injury claimed her career and dream, she’s stuck in a cycle of just… living.

Down on her luck and struggling, she found herself being offered a temporary position as a personal assistant to Dietrich Moore, a man more powerful than he had a right to be.
Spending a month on the sandy beaches of Portugal didn’t seem like work, but it didn’t take long for her to realize Dietrich’s extracurricular activities ran on the more obscene side.
Known as ruthless and dominant in everything he did, Dietrich took what he wanted without thought or remorse. Though already in a relationship with Stellan Alfonso, an ex-quarterback and businessman, Dietrich and Stellan felt something was still missing in their lives.
It wasn’t until he met Blythe that Dietrich realized she was the only one who could complete their relationship.
Dietrich and Stellan were about to use the next four weeks to show Blythe exactly what it meant to be submissive in every way.

Note: This story was previously published as The Suit and Switch Claim Their Sub in 2013. Although it’s been re-edited and re-covered, the story itself is the same. This does contain MM, MMF, and D/s scenes.