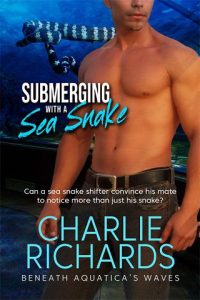 World of Aquatica: During a milking for his venom, a sea snake shifter catches a whiff of the one person who’ll change his life forever—his mate.

Kenny hates getting milked—the process where Doc Anthony eases his snake’s fangs through a thin lid covering a cup in order to collect his venom. Still, he knows it’s a necessary evil if he expects to live in a shifter pod. The doc needs it so he can always have anti-venom on hand, and since he used his last vial to save a human Kenny had bitten, he needs to make more.
Imagine Kenny’s surprise when, as Doc Anthony sinks his fangs through the paper, an amazing scent teases his senses. The distraction causes him to pop his head up, and he nearly stabs a fang into the doc. In the doc’s shock, he fumbles Kenny’s snake form, dropping him to the counter.
A set of hands Kenny doesn’t recognize grabs him. He struggles for an instant until he catches his new holder’s scent. Stilling, Kenny realizes the big human holding him with a firm and confident hand is his mate. He listens for a moment, learning the man is Renaldo Martinez, and he’s a snake enthusiast.
When Kenny shifts, revealing what he is and declaring their connection—that Renaldo is the other half of his soul—will he be able to convince his human to be just as enamored with him in human form?