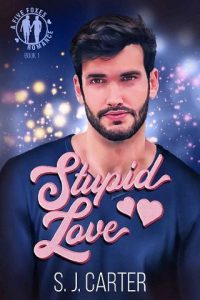 Face to face with an old grudge.
Riley Chase escaped the drama of Five Foxes High School when he went away to pursue his dreams of Broadway. After returning home to help a friend in need, now the only drama Riley can handle comes from his students on stage. But to keep drama club funds, Riley is forced to work with his old nemesis—the guy he’s hated since senior year.
Colton Effing Landry.

That old grudge is also smoking hot…
Since his senior year a decade ago, Colton has tried to make amends for his past mistakes—lying for a homophobic bully first and foremost. He never thought he’d be back at the school with so many bad memories. Still, he needs the job. But Colton’s first day as Five Foxes High’s new girls’ JV coach hits him with bad news. Two of his athletic teams are on the chopping block due to budget cuts.

And that’s where he finds Riley Chase.
Riley Chase, the guy he had a crush on back during high school. The same Riley Chase whose last words to him during their senior year were I hate you.
Not the way to kick off a new job.
A stormy past could lead to a nightmare of a fall semester.
Now they have to work together to raise the money to save their programs. It’s either that or let their kids down.

Can Riley really trust the guy who betrayed him all those years ago? And can Colton prove to Riley he’s not the same dumb kid he was back in high school?
Can hate really turn to love?