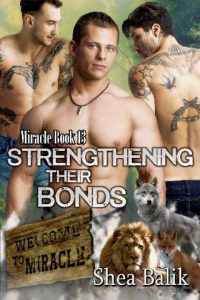 Devastated that his mate didn’t believe he was enough, Arjun Rowe decided it was time to leave Tevin and let his mate find whatever it was he was still looking for. It devastated him, but Arjun would do anything to make his mate happy, even if that meant letting him go.
Tevin Acker was heartbroken that he’d driven Arjun away. He hadn’t meant to, but there had always been something lacking in their mating. What? Tevin wasn’t sure, but he had been driven to discover what it might be. Never once had he considered he might lose his mate as he searches for that missing link.

Baz Krusen had always hoped to meet his mate, but he hadn’t imagined meeting him when he was leading a group of shifters from human hunters. Nor had he once thought that he would end up with two mates. When he discovered one of those mates had run away, he was determined to find him and fix the bonds of their mating.
With humans determined to capture shifters, will the three men be able to find their way back to each other? Strengthening Their Bonds will take all three of them coming together but only if they can forgive the past.