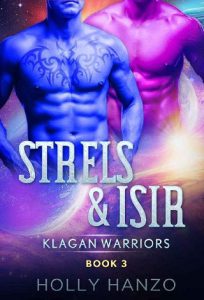 Klagan warriors Strels and Isir might be twins, but their physical appearance and personalities couldn’t be more different. Ever the stoic over-thinker, Strels had an innate need to plan, to be prepared for everything. Impulsive Isir lived everyday like a blind adventure, thriving on the adrenaline rush that came with spontaneity and recklessness. It was hard to believe they were battle-hardened warriors, sons of the Sovereign of Klaga.
Weary of battle, the brothers decide to retire from a life of war and espionage–no more missions, no more being taken advantage of, being used for someone else’s benefit. They’re about to make the biggest transition in their lives until the human mate of a battle-brother and friend begs them to take one last mission: find and rescue her lost sister.
Traumatized by her sister’s abduction during the Elodian attacks, Emily has spent the years since trapped in the shadow of a resistance organization. Living in fear is nothing new to her, and it’s a seductive prison she can’t bring herself to escape from. That chain around her tightens when two massive Klagan males land on Earth, insisting they’re on a mission from Audrey to rescue and retrieve her. But her distrust of aliens runs deep and thick in her veins, and it’s a struggle for Emily to simply ignore every warning flag in her head and go off with these hunky alien warriors.
Especially with this stirring feeling inside her that something isn’t quite right when she looks at these brothers. Isir and Strels know the feelings within them stirring are those of a mate bond, one they’d be fools to ignore. But sharing a human mate was never in the plan, and Strels wouldn’t make a deviation in his carefully-organized life. No exceptions, not even for himself. Isir lived the life of a playboy, taking what he wanted and being wild and free, a life that didn’t involve being tied to a human, especially one he had to share with his uptight twin. Emily is just eager to get to her sister. But the longer she watches these beautiful, white-haired Klagan men, the harder it is to deny her attraction to them.
Can these three wildly different souls find healing in the love they share? They say time, and love, can heal all wounds. Emily, Strels, and Isir would certainly find out.