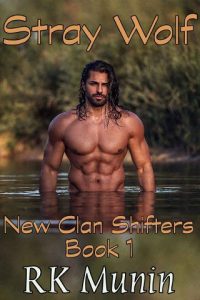 Steph has a physic gift that’s never led her astray. That means that when her gift encourages her to reach out to a dangerous and angry looking man sitting in the park near her house, she doesn’t even hesitate. Without fear for her own safety, she offers him food and shelter in her own home, unknowing that she’s about to be exposed to a world she never even knew existed.

Eli shouldn’t follow this human home. As a shifter that has trouble getting along with the powerful animal he shares his body with, he tends to be a loner. In fact, he stays away even from other shifters, so why is he agreeing to spend time with this fragile human female?
But this cheerful, loyal, and fierce female surprises him at every corner and before he knows it, she’s not only important to his wolf, but manages to insinuate herself with several clan members without even knowing what they are.

To add yet another problem, one Clan Leader is hell bent on using her as a means to an end. Then a rival Clan Leader sees her as a threat to his dominance. With two Clan Leaders gunning for her Steph is determined to help the many abused shifters under the dictatorial rule of these men, instead of doing the safe thing, which would be to run.
A battle is coming, but who will survive isn’t clear. What is absolutely clear is that Eli will stand by her to his last breath because there’s one thing that he and his wolf finally agree on. Steph is the most important thing in their life.

Trigger Warnings: there is talk about physical and sexual abuse and there is a nasty bad guy who likes to hurt people.