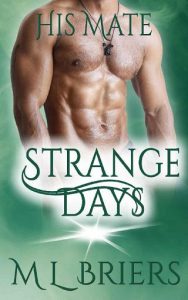 What would it take to give a wolf shifter that had been turned into a vampire his wolf back?
Was that even possible?
There was a legend that said it was, a determined alpha that wanted to keep the pack elders from banishing his brother from their land, and a witch that was tempted by the thought of uncovering new magic that was all willing to try.
What could possibly go wrong?

The hunt for the spell was on, and someone in the pack wasn’t playing by the rules. What they uncover might not only see the vampire, Nathaniel, banished from his pack, but could also be a deadly plot to get rid of the alpha.
The clock was ticking, could they find the spell and release the wolf before time was up, or would that spell be the death of them?

The first book in a new His Mate standalone series, come on in and join the family, it’s a howling good time.