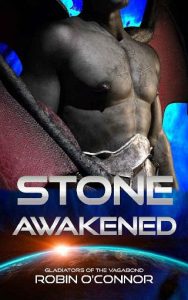 An alien warrior in uniform should be sexy, but it’s nerve-wracking when I’m on an undercover rescue mission.

Agatha
I don’t think twice about diving headfirst into a dangerous rescue mission, especially when it’s for the people who saved me. I’ll kick in teeth, swap uniforms, go undercover as a gladiator trainer. Nothing can throw me. Except him
That man in the uniform has his eyes trained on me. And I’m caught off my guard. He’s a little older and he looks like a freaking gargoyle, but each look gives me shivers.
I need to rescue these kids, escape. But it’s hard to think of a plan, when those gray eyes are always watching. Not everything is what it seems, and when changes come one after the other, I don’t roll with the punches, I might just fall straight into his arms.

Sunder
There’s only one thing on my mind. Rescue my son. I’ve got a meticulous plan for that and I’m not about to let anyone mess that up.
The stern faced, straight-laced teacher is the last thing I want to deal with, but she’s between me and my son. I shouldn’t find her attractive, she’s on a Crimelord’s payroll. Yet I can’t keep my eyes of her.
She’s an unlikely ally I can work with, and beneath that stern exterior? She’s hiding a fire I shouldn’t want to tame, but I can’t seem to stay away.