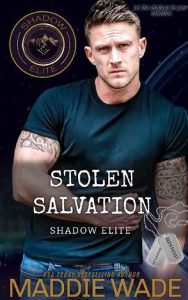 Protect the woman who shot him and left him for dead or turn his back on the only woman he has ever loved?
MI5 turned the boy, who’d lost not only his birth parents, but his adopted family, into a man feared by his enemy. Meeting fellow MI5 agent Charlie Winter and falling in love had been easy, moving on from the betrayal of his sweet, sexy wife shooting him and leaving him for dead had him wanting to give up and finish what she’d started and end his life.
Approached by the enigmatic leader of Shadow Elite to join the secret organisation tasked with the ending the biggest threats to peace and security, Bishop grasps at the chance for a new life and dragged the pieces of himself back together with the help of his friends at Shadow. His newfound peace is put at risk though when his ex-wife reaches out for his help.
The nightmare of grief and guilt Charlie lives with daily is almost suffocating in its weight, but nothing compared to missing the man she’ll love until her dying breath. Moving on without him after how she’d betrayed him to protect him, feels impossible. But with no other choice, she’s tried to build a life without Noah.
After a call from her sister saying she’s in trouble, Charlie reaches out to the only man she’s ever been able to count on. Begging for his help, even as he looks at her with the expected hatred and pain, is salt in her wounded heart. What does surprise her is still seeing the tiniest flicker of the love they had once shared in his eyes.
Working together to bring down the man who’s kidnapped her pregnant sister poses challenges Charlie never expected. It also forces her and Noah to examine the wreckage of their marriage and face up to a loss neither of them can talk about.
Just as it seems hope for a future is within their grasp, a twist of fate and a sacrifice rips it from Noah’s hands and leaves him helpless once more as he now races to save the woman he still loves.
With the help of their friends, can Noah and Charlie find a happy ever after or is that just not on the cards for people like them?