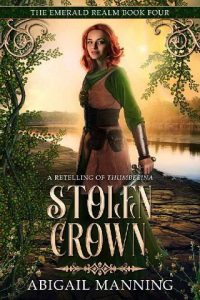 Nixie Greene is a small, agile, clever thief. In the fallen kingdom of Sybettal, the most valuable treasures aren’t made up of gold, silver, or jewels, but basic necessities. Nixie and her adoptive mother enjoy their peaceful life of scavenging until the neighboring kingdom of Ashbourne begins to dig their claws into their last natural resource—their people.
As the citizens of Sybettal are being coerced into joining the Ashbourne military under the promise of hot meals and shelter, a band of rebels rise with their own plan to aid their kingdom. Rumors are circulating that the infant princess of Sybettal didn’t perish twenty years ago, meaning that a new monarchy could be established if she was found. But where do you find a hidden princess who was adopted as an infant and has unusual hair? It would seem that the red-headed Nixie has a few new suitors she must now address.
What’s a thief to do when the greatest treasure in the kingdom is her own hand in marriage? Kidnappings, hunts, and deceivingly friendly faces all threaten to force Nixie into a crown she never wanted. Only one man actually seems to want to help her; however, he appears to harbor a few secrets of his own…
Can Nixie find the truth behind her past before her future is redefined? Or will she be robbed of her family once again?