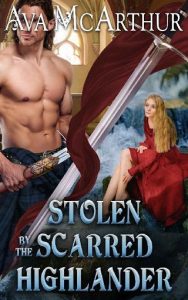 Her options? Cold-blooded murder or trusting an enemy.

As the daughter of an English Baron whose home borders the Wallace clan, Lyndsay Smythe is not allowed to leave the house in fear that the Scotts will steal her away. However, her father is in the process of securing her marriage to another aging baron, and Lyndsay is desperate for a way out of this situation.
One day, while trying to find an escape path in case she needs it, the lass and her horse drift further and further away… Suddenly, terror overwhelms her as she hears a rumble of horses in the distance, and when they come into her view, she realizes it’s a raid by the Highlanders coming her way!
A vicious man with a terrible scar across his face spots her, and he goes after her, scooping her up on his horse while she fights him. Douglas, as the brute’s name is, takes her to her house while it is being raided, ignoring her screams, holding onto her, and snarling back at his fellow warriors, claiming she is his! The lass is sure that there’s only one thing he wants from her, but she refuses to beg for mercy.
Douglas finds it difficult to carry out any violence toward her, and after the raid is over, he simple lays next to her. Surprised, Lyndsay realizes that the fearsome warrior has saved her from the beastly desires of the other men. Now, she wonders if she should slit the Highlander’s throat while he sleeps or if pretending to be his prisoner is the only way to make it out of there alive.