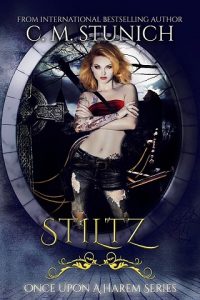 Stiltz (Once Upon a Harem #3) by C.M. Stunich – Free eBooks Download

Cameron Darke is a dhampir—half-vampire and half-human.
She’s also the firstborn child her mom promised to give up.

Rather than sacrifice her only daughter to the immortal assassin known as Rumple Stiltz, Cam’s mother went on the run, moving them from old trailers to rusted cars, under bridges or onto park benches.

Cam’s never known anything but poverty and desperation.
But at twenty-five, she’s an adult who’s ready to make her own choices.

The Vampire King is looking for a queen, and Cam intends to take the throne. The immortal bachelor has declared he’ll only wed a woman who can spin straw into gold.
A seemingly impossible task for some, but Cameron Darke knows exactly who can help.

The firstborn sons taken by Rumple in his many bargains are now adults, known as the Stiltz Brothers, and the three assassins are exactly what Cameron is looking for.

Once upon a time, their leader spun straw to gold for Cam’s mother, and now she intends to use his kin to win her crown.
But this time, the Stiltz’ boys don’t want to take Cam’s firstborn child—they want to give her one … personally.

Cam enters a fool’s bargain with three dark, deadly men.
But it’s she who intends to double-cross them.
She just never expected to find her heart on the line.