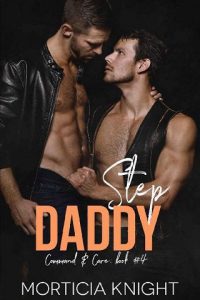 Kit has two questions: When did he start being attracted to men? And why does that man have to be his stepbrother?

When Kit’s mom got married to Gareth’s dad, six years and zero interest in each other existed between them. But that all changes when Kit starts noticing what a cool guy Gareth is. A bit of hero worship sets in, but that’s the extent of his feelings toward his brother.

Or so he thinks…

Gareth never paid much attention to the little brother he inherited when his Dad got remarried. The kid was nice enough, but whatever. He had plenty of fascinating activities to capture his attention—the type of activities that a teen becoming a man hides from his family. After a stint in the Marines and a growing career in Motocross, Gareth has set himself up nicely in Vegas. All his favorite pursuits are at his fingertips. And as much as he loves racing bikes, he loves his downtime as a respected Daddy Dom even more.

One night, Gareth is stunned when his younger brother shows up at his door unannounced. He’s even more shocked at how much Kit has grown in all the best ways possible. How will he keep his greedy hands off his hot stepbrother? If only Kit didn’t need his help so badly, maybe Gareth would stand a chance…