Home
contemporary romance
Stand Next to Me by Calle J. Brookes (ePUB) 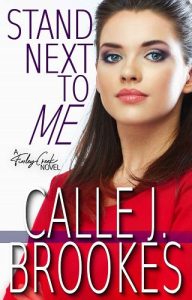 Stand Next to Me (Finley Creek #12) by Calle J. Brookes – Free eBooks Download

—NOT GOING TO HAPPEN. ◆◆◆◆◆
Not when the beast is Major Crimes Detective Jake MacNamara. Sparks fly between them whenever they meet. Shelby Jacobson doesn’t have time to deal with him.
Especially now.
He is just getting in Shelby’s way as she finally fights to keep a promise made long ago.

The TSP and being a cop is so deeply entrenched in his soul Jake doesn’t know where the Texas State Police ends and he begins.
But… he has always wanted Shelby. And sometimes the woman who had inherited millions just gets too close. Tempts him too much.
That makes him a bit…surly…where the sweetly shy lady is concerned.
He knows he’s an ass to her, but it’s the only real defense he has against her.
Jake is made for work boots and cotton T-shirts—not donning tuxedos and attending charity benefits with a woman like her. He’ll just keep his distance so he doesn’t do anything stupid.

Shelby has a secret so dark and dangerous people will kill to keep it hidden. Now she’s found herself entangled in the biggest case of Jake’s career—with only one man who can protect her.
Only…Jake and the TSP might not be enough to keep her safe.
If Jake fails, Shelby will pay the price.
And Jake will lose the one woman he has ever loved forever.

Stand Next to Me takes place one year after the events of the Finley Creek: Disaster trilogy, and is a complete, stand-alone romantic suspense novel.