Home
Historical Romance
Spinster Ever After by Rebecca Connolly (ePUB) 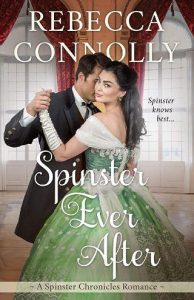 When a man loves a spinster…

Charlotte Wright had had enough. All of her friends have now married, leaving her the lone writer of the Spinster Chronicles who is still a true spinster. So she’s decided it is time for her to join the ranks and get married, groom to be determined. She’s an heiress, after all. How difficult could it be to find a husband?
Michael Sandford has been there by Charlotte’s side from the very beginning, loving her all the while even when she turned down his proposal. When she tells him of her plans to marry and marry soon, he begins to make plans himself. He cannot stand by and watch her marry someone else, so he’s decided to distance himself from Charlotte entirely while she hunts for a husband… one that is not him.