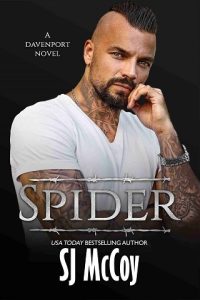 Spider grew up in foster care. Moved from one placement to the next. Yeah, they were placements. Not foster families or homes, just placements. He survived. And that’s all he has to say about it.
But that’s his past. His present is pretty good. He’s worked hard. He runs his own business. It’s only a coffee shop, but it does well enough. He makes a decent living. More than the money though, the coffee shop is a part of the community. He’s a part of the community.

Life is good. He has some amazing friends. Friends who run the gamut from billionaire brothers to homeless vets. He’s been missing one of his friends lately. One very special little boy named Owen. Owen moved away to Montana with his mom and his new dad, Reid Davenport.
When Owen begs him to come visit, Spider jumps at the chance. He’s always wanted to see the mountains and experience life outside LA. He knows there’s a whole different world out there.
When he gets to Montana, he’s about to find out just how different life there is. Sure, the scenery is amazing, but it’s the people that fascinate him the most.

Especially Frankie.
Frankie MacFarland isn’t like anyone Spider’s ever met before.
Gypsy soul. Crazy cowgirl. Heart of gold. Mouth of a sailor. Hell on wheels. Sweet angel to the kids she works with. A walking contradiction in so many ways.
Spider knows all of that within an hour of meeting her and it only leaves him wanting to learn more.

But just as he’s never seen anywhere like Paradise Valley before, its residents have never seen anyone like Spider before – and not all of them like the idea of him getting anywhere near Frankie, let alone getting as close to her as he’d like to.
Frankie’s not the kind to let anyone tell her what to do. While she might not have gotten the best first impression of the tattooed stranger in town, she’ll be damned if she’ll let her brother, her cousins or anyone else stop her from getting to know him better.

Can a tattooed stranger and a gypsy cowgirl find love in Paradise Valley?