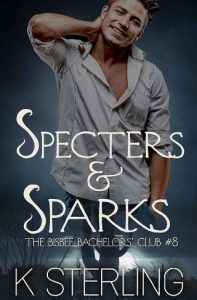 Men tend to run when one of your “uncles” is the scariest man in Bisbee and your other uncle is a private detective. But Owen’s made up his mind. It’s finally his turn and he’s found the right man. He’s just got to break it to his dad and make his uncles accept that he isn’t a kid anymore. Being the town sweetheart, there’s nowhere Owen would rather be but it’s been hard to…spread his wings. His new roommate, Chief Fox, is everything he’s been waiting for and Owen isn’t playing fair this time.
Poor, poor Fox… CW4 Jack Fox thought he was moving to the quirky small town to settle down and raise a toddler daughter he’s only had a handful of days with. Enter Owen Talbot and the weathered warrant officer’s life is turned upside down. The age gap is enough to give Fox more gray hair but he has the entire town looking over his shoulder, making sure he’s the right man for their beloved Owen. Half of Bisbee is ready to play matchmaker while the other half is ready to run Fox out of town. But the brilliant younger man soothes Fox’s battered soul and makes him feel whole.
Fox already has a lot to prove if he doesn’t want to answer to Beau Arnett but a face from a different desert and the past has come to Bisbee to settle a score. For the first time in his life, Fox has something to lose. He turns to The Bisbee Bachelors’ Club for help catching an old nemesis who got away and Owen steps up, ready to fight for the man he loves and save his new family.