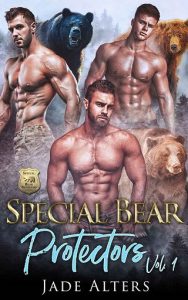 ♥ Alpha’s Second Chance ♥
Born an omega, my shifter clan owned me and gave me away.
I was treated like a possession.
Auctioned to an Alpha.
I tried to love him but I refused to give up my freedom to be his property.
So I ran.
I rebuilt my life in the city as a prosecutor, pretending to be human.
For too long, I kept my cravings and desires at bay.
The hunger for my old existence faded as I focused on my new life.
But then I made a grave mistake…
Now I’m being hunted and I’m on the run again from not just one but TWO men.
It doesn’t help that I’m also in heat.
Alpha’s Second Chance is a steamy paranormal shifter romance with hot Alpha bears, a strong BBW and a story about why love might be better the second time around. Intended for mature audiences. No cheating and no cliffhangers.

♥ Single Dad Matchmate ♥
Fate brings uber successful New York city girl Victoria into Lucas’ small town of Pine River in Arkansas where he’s the Sheriff and a volunteer firefighter. Hunky and heartbroken, Lucas knows his two kids need a mom but he’s reluctant to try his hand at love again. All of that changes the second he meets Victoria.
Strong and independent, Victoria doesn’t need a man, she wants a man.
Stolen glances and searing kisses aside, will the family drama, secrets and threats tear them apart or bring them even closer together?
Single Dad Matchmate is a fast-paced, sweet and steamy bear shifter romance with a strong female heroine looking for an equally strong but loving alpha male partner to share her life with.

♥ Claimed by a Beast ♥
Being a TSA agent can have some pretty exciting moments but I never thought that I’d end up being targeted by terrorists.
Nobody warned me that my rescuer would be drop-dead gorgeous and even more dangerous than my enemies.
Noah is part of a Special Forces Operative.
And he has a lot of secrets..
Including the one that has me drawn to him.
Call it fate or whatever you want.
He’s claiming me as his mate.
With all that’s been happening in my life, I’m not sure I can handle it or even want to.
But one thing is for sure, he needs my help.
He did save my life after all..
Claimed by a Beast is a fast-paced, sweet and steamy bear shifter romance that approaches the emotional trauma of PTSD in a caring and sensitive way.