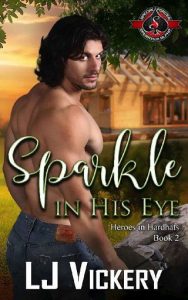 Zaine “Zero” Oates grew up under the worst of circumstances; trapped in a troubled life he never talks about. With hard work and perseverance, he reached his goal of becoming a Navy SEAL, but a dozen years into his dream-career, an insurgent with a knife inflicts an injury, cutting his military tenure short. Life after the teams looks pretty bleak until Tex the miracle-man sets him up with a job working for an ex-Army Combat Engineer building homes for wounded Vets. What he doesn’t count on when agreeing to come to Pleinfield, is forming a crush on the mystifying local librarian…a woman who clearly harbors deep secrets of her own.

Ginny “Sparkle” Smith—up and coming actress—is laying low, her current life as a small-town librarian giving her the cover she needs to hide from her stalker. But the stress is getting to her. When will her exile end? She yearns for a life outside her small duplex apartment and the little library’s story-hours, but as long as someone is after her, she’ll never be able to return to the big stage in New York. When an additional monkey-wrench gets thrown into the works, in the guise of a handsome, curly-haired ex-soldier who wants to date, how can she let her guard down and say yes? But how can she say no? Danger is in the air, but so is love.