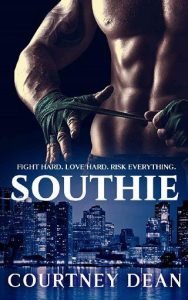 Liam “Southie” Daugherty grew up in the Irish working-class neighborhood of South Boston, Massachusetts, also known as Southie. The son of a policeman with a drinking and gambling problem and a pill addicted schoolteacher mother who was nothing more than a punching bag for his Pops, Liam never had the best outlook on life or love. But he was always good at one thing.

Fighting.
His love for fighting brings him face to face with the underworld of South Boston, and his natural skills in the ring catch the eye of the notorious Southie mob boss, Paddy O’Connor. Paddy offers Liam the deal of a lifetime for a young man living in Southie; in return for becoming the notorious mobster’s Enforcer, Paddy would spare his father’s life and cancel the gambling debt his father owes to the mob.

With no other choice, Liam agrees to the deal to save his father’s life.
Liam’s job as Enforcer brings him to a crossroads when he meets his childhood idol, boxing legend Roland Jennings…and Roland Jennings’ daughter, Camilla, an up-and-coming Boston photographer. Roland tells Liam to stay far away from his daughter. Their relationship wouldn’t be welcomed in the insular, working-class Irish neighborhood and them being together could put Camilla on Paddy’s radar.

She’s the one woman he needs to resist.
Should resist.