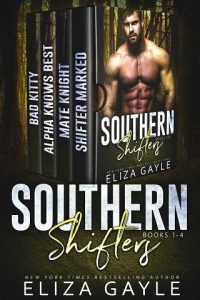 In Eliza Gayle’s sensational Southern Shifters series, four alpha male shifters must face the challenge of their lives–mating. Amidst enemies who will stop at nothing to get what they want, these bad boys face danger, pride, secrets and choices that change everything.

The stories included are:

SHIFTER MARKED
An uneasy alliance, a forbidden mating call that won’t be denied, and unrelenting enemies who will stop at nothing to get what they want.

Lucas Gunn has been kidnapped, examined and tortured.
His only remaining tie to the outside world is in his dreams and the incredible woman who appears in them nightly.

He thought she was nothing more than a figment of his imagination. Then she came for him.

Kira MacDonald is in trouble. Her psychic ability to “see” things has gone haywire. She’s being plagued by false visions and dreams of a man she’s never met.
She’s desperate for a cure, which means finding and bonding with a mate. Something she fears more than losing her mind.

Too bad fate has other plans for her.

Passion and Pride. Duty and Danger. In the end, there’s really only one choice.

Kane Gunn is beyond frustrated. He has a kill order to fulfill and after weeks of chasing his target, he’s fresh out of patience.

When he catches the woman who’s become his obsession he’ll have to decide between his quest for justice and an overwhelming desire that is consuming him.

Lara is determined to seek revenge against the Clan Gunn shifter guardians at all costs.
Until she finds herself face to face with the pair of green eyes that have been haunting her day and night.

But time is of the essence as the tables are turned and they’ll soon learn that choices change lives.

ALPHA KNOWS BEST
He can run but he can’t hide. Not from duty. Not from danger. And especially not from the woman who forces him to face the truth.

Malcolm Gunn’s time is running out along with his ability to shift. When confronted with his past he thinks he’s found a solution.

Unfortunately the woman who is the key to his existence wants nothing to do with him.
Cheyenne’s been hired to track and retrieve Malcolm at any cost.

Her only plan is to get in, get out and keep her sanity intact. In that order.

But she’s been warned. If he catches her, he will stake his claim.

Deceit and lies bring them together. Murder puts them on the run. Their enemies are closing in and there’s only one, irreversible way out.

BAD KITTY
If you think you’ve lost everything. Think again.

Kitty lost her father, her home and her clan. Clinging to what’s left of her pride, she’s forced into the neutral zone, the supposed safe haven for half-breeds and outcasts. An attack forces her to the wrong side of the treaty line and into an even more dangerous situation. Determined to greet death with the last of her dignity, she is suddenly rescued by a tall, gorgeous…wolf???

As the next alpha leader of his pack, Rafe Comyn has more than enough to handle with pack politics and precarious treaties. The last thing he needs is a pissed off feline landing in his lap, especially when her scent triggers his overwhelming drive to mate. While the daughter of a former rival is quite a conquest, she’s both forbidden and dangerous.

But as the heat of desire threatens to consume them, their differences escalate and Rafe must keep his own pack from killing the one woman he can’t live without.