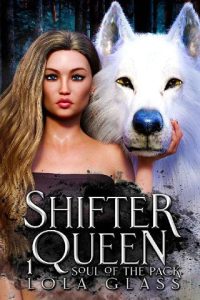 Tendira is a world of beastly shifters and deadly monsters… except me.
The Human Queen.
When my home is taken over by an angry pack who wants me dead, I’m forced to run, so I go to the one place my attackers won’t dare follow:
The Blood Pack.
But the Blood Alpha watches his territory more closely than I imagined. His people catch me, and drag me to their capitol. And instead of killing me, they decide to keep me.
The problem?
They have no idea who I am.
So now if I want to stay alive, I have to make the most ruthless pack in Tendira believe I’m one of them.
That plan goes surprisingly well… until the Alpha decides he wants me as his mate.
Then I’m a human pretending to be a shifter, a queen pretending to be powerless, and a woman pretending not to fall in love with the deadliest shifter that’s ever existed.
I’ll die if I go back to my castle, but if the Blood Pack discovers my lies, I’ll suffer a fate far worse than death.
And with my survival on the line, I can’t afford to lose anything to the Blood Alpha…
Especially my heart.