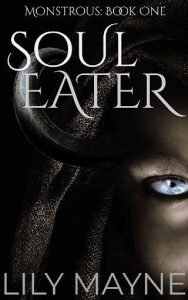 Twenty years ago, monsters rose on earth and began a new age of civilization.
One where humans live in military-controlled, cramped and dirty cities along the coasts, and the majority of the United States is known as the Wastes. A lawless, desolate and dangerous place, teeming with monsters that have claimed the land for their own.

Including Wyn the Soul Eater.
He appears every three years, making his way across the country and slaughtering humans randomly, sucking them dry until they’re nothing but husks.

I’ve only been in the military for six months, but now I’m part of a unit tasked with trying to stop and capture him. And when I’m the only soldier out of hundreds that the Soul Eater leaves alive, I realise that… something about me has intrigued him.

But what is it? What could a twenty-three year old guy from the south, with no one and nothing in the world, have possibly done to capture the attention of a death monster with horns, blackened fingertips and a face hidden in the dark depths of his hood?

Soul Eater is the debut novel of Lily Mayne. It is the first in a planned post-apocalyptic fantasy series featuring monsters and human men falling in love. This m/m love story contains explicit content and is not suitable for young readers. It also contains scenes of violence, but don’t worry—they get their happy ending.