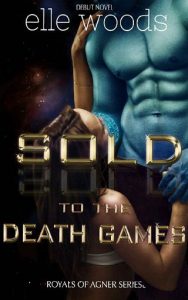 I didn’t ask to be abducted by alien slavers.
I certainly didn’t ask to be sold, forced to fight to the death in an intergalactic battle arena like some messed up alien hunger games.
But now I’m in here, stuck in a purple jungle, trying to survive…
~~~
Rachel was happy living a normal life in New Orleans when she and her best friend Arya are abducted by aliens. Sold to the highest bidder, she wakes up in the Death Games, an intergalactic arena where enslaved aliens are forced to fight to the death.
~~
Tor didn’t expect to find his mate in the Death Games. He was on a mission to find his missing brother, the future King of Agner. He especially didn’t expect his mate to be a small, curvy alien from an unknown part of the galaxy. And he would do anything to protect her.