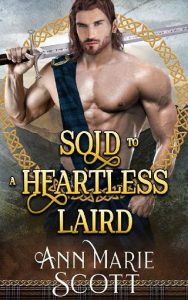 Trapped between two monsters, she must choose one to trust.

With her beloved father killed in battle and rumors that her cousin murdered their mother to take the lead, “desperate” does not even begin to describe Rhona McCarron’s situation. The brave lass is determined to fight against her power-hungry cousin, but when he threatens to kill her younger sisters, Rhona has no choice but to comply with his will.
However, his devious plan surpasses her worst nightmares; not only does she have to marry a Laird, but she must murder him a couple of days later! To make things even worse, Laird Duncan McGregor, the man who must die by her hand if she wants to see her sisters alive again, is not a total stranger to her.
Rhona has heard rumors of the towering red-headed Scott who is built like a warrior. People say he rules his clan fairly but is prone to war and violence and as soon as the lass sees Laird Duncan, she wonders how she will ever be able to kill this beast. But to her surprise, the Laird is not as ferocious as he looks, and many of the violent actions of his clan are not his fault.
Rhona knows that killing Duncan will make her evil cousin even more powerful and contemplates helping her new husband fight his enemies to gain his trust. Could the two find a way to get rid of the snakes that poison their clans from within, or is Rhona simply endangering her sisters in vain by delaying Duncan’s killing?