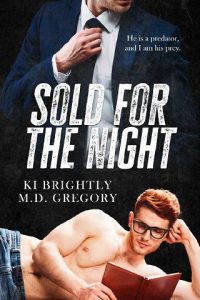 Prey: The Rabbit
Mark Fenton, assistant to the mayor, never regretted opening his mouth more than he did when he insulted Madam Winters’ establishment, the Courtesan Hotel. Now he’s being sold off for a night in the summer auction. It’s small comfort that part of the proceeds benefit charity. The man who buys Mark’s time, Camden, is wild and unruly. He’s not Mark’s type, from his giant body to his rough nature, but the more time Mark spends with Camden, the more he finds himself having fun.

Predator: The Wolf
Camden Wolf knows what he likes—redheads who want to be pursued—and Mark appears to be exactly that. When Madam Winters tells Camden about the feisty man she has ready for the auction block, he can’t resist putting a claim on Mark. Chasing him has Camden’s inner primal nature excited, and he can’t get enough of Mark. But as much as they are having fun, Mark is skittish.

Attack and Capture
Mark fits into Camden’s life like a missing puzzle piece, and Camden’s daughters and his best friend/ex-wife love Mark. But convincing him they can have a future is difficult, especially when all Mark wants to do is run away in fear. Luckily Camden is the kind of man who loves a challenge, and he has plans to make Mark his in every single way.