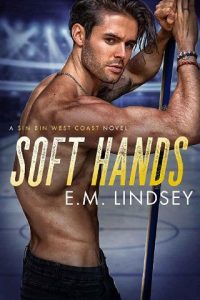 There are a few things Nolan Ouellet has come to accept about himself.
One: that his future with the NHL was irrevocably destroyed thanks to his reckless actions as a teenager destroying his knee.
Two: that he will never fall in love because the very idea of it sends his skin crawling.
Three: he will bed as many NHL players as humanly possible before he retires his game.
And four: he will never apologize for who he is and what he wants.
Then two men come barreling into his life and turn everything he knows upside down.
He still won’t play for the NHL, and he still won’t change who he is because he’s fought too long and too hard to accept his identity. But suddenly his future is starting to look a little different than he originally planned.
And that scares the absolute hell out of him.
When he met Marko Rudenko and Luka Wagner—two veterans of the Denver Huskies—they were supposed to be a game, just like everyone else. But now all he can think about is how to keep them around without compromising the person he’s become and ruining the love Marko and Luka have for each other.