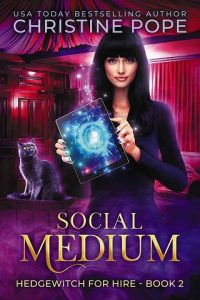 There’s no mean girl like an internet mean girl. Especially when she’s a witch.

Selena hasn’t been in Globe, Arizona, very long, but she’s quickly learned to be wary when her friend Josie gets a bright idea — like insisting she join the growing legion of internet witches. While being an Instagram star sounds like a good way to promote her metaphysical shop, Selena can’t ignore the feeling she’s about to get some pretty crappy juju dropped on her head.

It isn’t as if she doesn’t have time to produce content — or even date, since it appears tribal police chief Calvin Standingbear has ghosted her. Too bad the perfectly nice rancher who offers his place for a live-streamed solstice bonfire ritual doesn’t strike a single spark.

But when the dark side of social media rears its ugly head, Selena’s going to need all the friends she can get, including the secretive police chief. Because social media rivalries can be murder — and Selena could be targeted as a suspect…or the next victim.