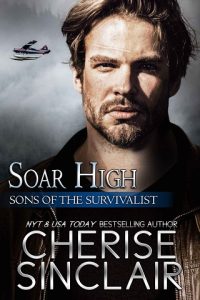 She survived.
Kit survived her abusive husband. Survived imprisonment and beatings from the Patriot Zealots. Now free and healing, she can make a new life for herself and her son…except he has attached himself to a terrifying, scarred, tattooed ex-mercenary.

Women take one look at him and flee.
An ugly childhood and combat left Hawk with scars, a rasping voice, and an aversion to talking. So, why in hell does the four-year-old stick to him like glue?
The kid’s pretty mother is smarter. There’s fear in her eyes when she looks at Hawk. That hurts. The sweet woman is everything he’s ever wanted—loving, affectionate, and patient. But after what she’s been through, she sure won’t want to be around men—especially the one who killed her husband.

He’d saved her.
Kit agrees with her son. Being near Hawk is the safest place on earth. Beneath the menacing appearance, he’s protective…and kind. The better she gets to know him, the more she sees him as a man—a very sexy man. But, considering what had happened to her, she knows—
No man would want her now.