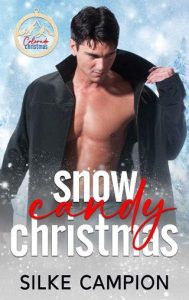 Christmas is stupid. Snow is stupid. Going back to her little hometown of Hedby, Colorado with her tail between her legs is the stupidest thing of all. But Natalie Moore is raising the white flag — at least until the New Year, when she’ll be able to face the world on her own again. An independent woman with no one to lean on. All by herself. Alone. With no one to love… Ah, reindeer poop.
Sean Greenway left behind the harsh winters of Vermont and the harsh life of a soldier and came out west to build something new. And hopefully, rebuild himself in the process. So far, so good, but while his buddies spend the season with their families and loved ones, Sean holes up in his little house and waits for the long, dark nights to be over.
When Natalie shows up in the midst of one of those nights and they find themselves trapped together, Sean discovers some sweetness in the snow and some heat for the holidays. He’s just hoping their Christmas wishes will last forever.