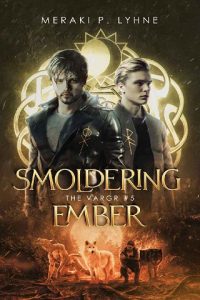 The belief in the old gods of Norse Mythology may have been suppressed by Christianity, but that doesn’t mean the races of old didn’t survive. Like the Vargr wolves.

The warrior Sköll has finally risen, and the power of the ember now drives Sköll as the four legendary wolves gear up to face their enemy. They won the first battle. That battle started a war.
It seems the lot in Matt’s life that every time he conquers a challenge, something new is thrust upon him. He finally stands the risen Vargr, Sköll. His fur shone beautifully white in the moonlight—a stark contrast to the blood looking black as it ran down his torso.
Hati is now driven by an individual ember, but its purpose has to save his mate from succumbing to bloodthirst. Hati needs to learn to channel their vision for the future as his mate rises with preparedness for war far exceeding what anyone had imagined.
Pack Alpha Steffen has his work cut out for him. Having the four legendary wolves on his territory isn’t easy. At least his Alpha mate, Regional Alpha Tristan, has contacts to aid the Alphas rising to take on the battle that no Pack Alpha could aid them in alone. But first…damage control.
Tristan isn’t the only one bringing in a powerful ally. Queue the epic soundtrack. The newly risen Cubi King of the West has an old school buddy who needs a hand in seeing a common vision through.
Ghosts from the past haunt them, along with Völsung whispers from the shadows. The most dangerous enemy, though, whispers from within.