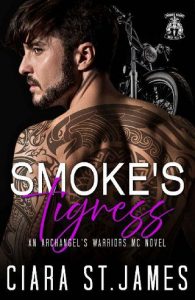 Smoke found his home with the Archangel’s Warriors. His days of working solely at the whim of the U.S. government are behind him. He chooses when he takes a job and when he doesn’t. He is always the one to save the day for his club, no matter the problem. However, this time he fails and the sexy, brilliant woman who walks into his club not only saves the day, she puts him on alert. How does she have access to a program he knows is beyond top secret? He expresses his distrust, only to find out she’s not only the program’s creator, she’s a friend of one of the old ladies!

After she leaves, he can’t forget her, but she seems to find excuses not to come back. He wonders if it’s because he had been less than welcoming at their first meeting. Then one day his club gets a call. She needs to lay low. Her cover might have been blown and she might be in danger. There’s more to her than just a programmer and designer. Now, Smoke has the opportunity to find out why he’s not been able to forget her.

Everly doesn’t want to go to the Warriors for help. But she has no choice. Smoke is still acting like he can’t stand her, which hurts, so she reconsiders her options. Harsh words, a dominate stance, and misunderstandings almost costs her, her life. And Smoke realizes he’s got feelings that he can’t ignore. But they have more than one obstacle in their path. Bunnies being only one of them. And one of those obstacles has her going undercover to take down an international ring, and using herself as bait. Can Smoke support her decision and still have her back? Or will his decision be one that makes her walk away? He’s determined that he’ll do whatever it takes to win and keep Smoke’s Tigress.