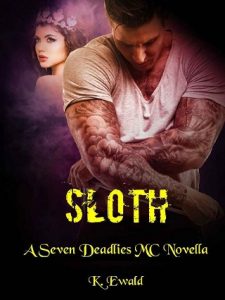 An MC romance with a little comedy, a little violence, and the right amount of sexy.
Sinning never felt so good…

Torch knew that Isabelle Turner wouldn’t make things easy. She didn’t know how, not after what she’d survived before he rescued her. Now, she was a mute, scared, near-feral little creature that he couldn’t keep his eyes off of. He would try to leave her alone, if every fiber of his being wasn’t vying for the opposite. He’d promised he would exact revenge on the men that hurt her, and that’s exactly what he planned on doing.

Izzy isn’t in the right mindset to be making friends, but that’s exactly what she ended up doing. She didn’t want to leave the Seven Deadlies, she didn’t want to go home, but she did want to figure out who she was…and, what she wanted. The only thing that seemed to make sense was Torch, and the burning need for revenge that kept her entire body awake with anger. Even though she knew that she couldn’t go back to her old life, that didn’t stop her from struggling to decide who she was going to be in her new life. There was a lot she needed to take care of, but first? First, she had to put an end to the Madmen, before she went mad herself…