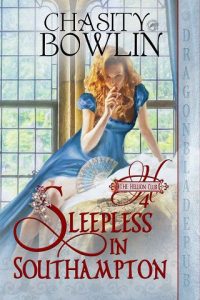 Every touch brings with it a world of temptation. Eventually, there is a point of no return.
Miss Sophia Upchurch is not having a good day. Her employer is dead, she’s been robbed, she’s now stranded in a strange city and the handsome man she’d met on the stage, the man she’d flirted with, is no longer simply Mr. Henry Meredith, a possible suitor. He turns out to be Lord Henry Meredith, Viscount Marchwood, and so far above her reach there can’t possibly be any hope even as he heroically secured a position for her as companion to his cousin. But that position is beset with complications and Sophie fears the young woman’s life is in danger.

When Sophie informs Henry of her suspicions, he’s dubious at best. But the more he looks into the matter the more convinced he becomes that she is correct. And that means not only is his cousin in danger but so is a woman he is coming to care for very deeply…possibly even a woman he loves.

Can they get to the bottom of it before his cousin succumbs to the plot? And assuming they survive to have a future, can he convince Sophie to share it with him?