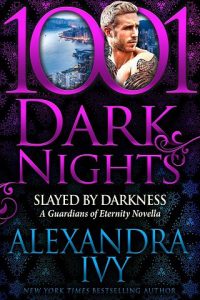 Only an idiot would try to kidnap Jayla. She’s a take-no-prisoner kind of vampire who rebelled against the previous King of Vampires, and now regularly battles with both human and demon enemies who resent the success of Dreamscape casino she manages in Hong Kong. So when she’s snatched off the streets, she doesn’t bother to struggle. Instead she starts plotting her slow, bloody revenge.

The last creature she expects when she arrives at her destination is Azrael, the mysterious mercenary vampire she killed a century ago.

Azrael has never forgotten Jayla, and not just because she tried to stab a stake through his heart. He’d never encountered a female who could match him in battle. Her raw courage was sexy as hell. And it didn’t hurt that she was drop-dead gorgeous. But, he didn’t abduct her because he desired her. Or at least, that wasn’t his main motivation. He needs her rare talent to stop time. An evil fey has stolen his sword. The weapon is magically bound to him, and unless he retrieves it, he’s doomed to a painful death.