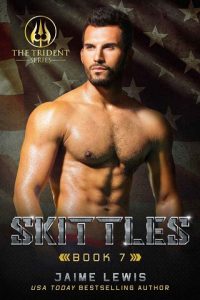 Anna Grace wanted two things in life; to stay alive and to clear her name of murder. Okay there was a third. To one day find the one person who she knew could help her. Noah Young—her crush, her friend, and most important—her alibi. Until she found Noah, she’d stay hidden in the little beach town she now called home. But all towns come with secrets and surprises and Anna Grace is in for the surprise of her life.

As a Navy SEAL, Noah “Skittles” Young was used to closing out missions with his SEAL team. However, there is one personal mission that has eluded him for the last ten years. Anna Grace was not only his younger sister’s best friend, and the one girl he let slip away, she was also considered a missing person. Using his keen, investigative computer skills, Skittles vowed to never give up searching for her even when everyone else had. When Skittles is invited to a surprise birthday celebration, he discovers that the surprise is on him when he finds himself staring into the soft violet-colored eyes he’s longed to see again. As the past starts to unravel itself Anna Grace and Skittles realize that her disappearance and her parents’ murder wasn’t a random act. It was planned.

As outside forces align to silence Anna Grace, will Skittles, with the help of his team, be able to undo the tangled web of her past ten years to keep her alive and help her regain her true identity?