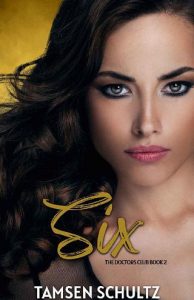 Exploitation, greed, and murder…there’s nothing Violetta “Six” Salvitto won’t do for her friends.

Jeremy Wheaton is dead, but his friend, US attorney Violetta “Six” Salvitto, is certain it’s not the accident the police think it is. And judging by the way the uber hot paralegal from her office, Gavin Cooper, keeps cropping up in her off-the-books investigation into the hit-and-run, she’s not the only one questioning the finding.
Gavin didn’t a have choice when his superiors assigned him to play backup to Violetta. But after watching her for five long months, the boisterous, hot-tempered, and sexy as hell woman has gotten under his skin. No doubt, she’ll cut off his you-know-what when she finds out who he really is. But despite the risk to his beloved anatomy, he’s not about to let her investigation into Wheaton’s death put her in danger.
From Boston to Indonesia to New Hampshire and back again, Six and Gavin follow the breadcrumbs of her friend’s life. And when hitmen, murder, and crimes against humanity start cropping up at an alarming rate, they know the trail is a hot one. Now the only question that remains is if they can stay alive long enough to finish what Jeremy started.