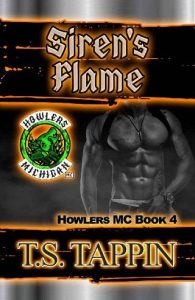 Siren knew he wanted April the second he laid eyes on her at Bobby’s Bar. His lion whimpered and purred at her shy glances in his direction. He knew he would have her. She was exactly what he had been looking for and what his inner lion had been craving. Their mate.
All April knew was that Siren was intense. Intense in everything he did, and intense in how he made her feel. When he looked at her it was as if he could see her every secret and every desire. His eyes also promised to satisfy those desires. That’s what freaked her out. As inexperienced as she was, she wasn’t sure she could handle him. What if she was boring? How humiliating would that be?
Siren leaves town for months to care for an ill family member, but when he returns he finds that shy April has found herself. She’s still sweet and a bit shy, but she has more confidence in herself that wasn’t there before. He’s enthralled by it. And after their first date, they are on the same page about their future- It will be together.
But Siren messes up and April is kidnapped. If he’s able to get her back, will she forgive him?