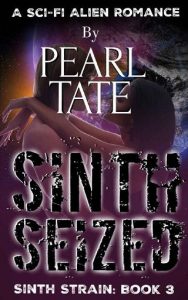 Jen:
My best friend was abducted by aliens!
I’d be so pissed if that happened to me. I’ve spent almost nine years working ten to twelve hour days to establish a business, pushing vacations and future plans to … someday. I’ve yet to really live and being abducted and almost dying isn’t on my bucket list.
Amy’s returned with a “mate”, telling me he’s immune to all illnesses—and now she is too. She demonstrated her new disappearing act, swearing she’s “phasing” into another dimension and saying every time she does, her body resets to perfect health. I’m super jealous since I’ve lost so many loved ones to cancer, starting with my father when I was only a child.
I want someone that can’t get sick. Someone who can take care of me for a change. I’m exhausted from the daily grind.
When Mavin’s partner Trus shows up, Amy’s sure we’re mating compatible, but the timing couldn’t be worse. There’s a new virus everyone’s talking about, and people panic as businesses shut down. Only my business explodes, and my training efforts to lighten my load are not panning out.
But I’m done waiting for the stars to align to enjoy my own happiness! I’ll create my own future—now.

Trus:
My best friend found a mate in a food pen!
All my life I’ve held my breath and hoped I’d see my friends again. As a Sinth Guardian, it’s not unusual for someone to enter their dimension and never return. We get worn down, giving up on life due to loneliness.
In an effort to make sure Mavin doesn’t disappear forever, I back him up, accepting the same punishment on a backwater planet called Teleplay. The alien planet is being mined for its resources and not habitable for many species. You can imagine our surprise to see Earth humans in the food holding pens.
When I confirm that Mavin has stolen the female Earth species from the pen and mated with her, I’m shocked—and excited! A mate means company and a potential family.
Gathering information about who’s responsible for the Earth species arrival on Teleplay, I work with the Sinth Sovereignty, Taxin and Ashen alien species to get to the bottom of the Human’s abduction. Trailing suspects and spying from my dimension, I know that finding my own mate shouldn’t be a high priority. But when I meet someone who’s mating compatible, how can I not want to get to know her?
But those distractions can be deadly. New technology I’ve never seen before threatens the future for everyone, and now I have more to lose than ever before.