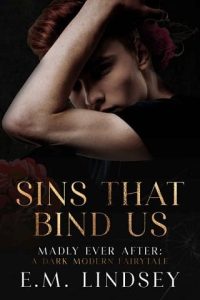 Sins That Bind Us (Madly Ever After #2) by E.M. Lindsey – Free eBooks Download

My name might be Alice, and this sure as hell isn’t wonderland, but everyone is definitely a little mad here.

A line was drawn, bets were placed, and the chips fell, leaving me in enemy territory. The only reason I can live with that is because this gamble allowed me to make my own choice.
As the only daughter of the Romano empire, I was always up for auction, but Kane made me an offer I couldn’t refuse. I might be exchanging one level of hell for another, but at least in this one, with Hades by my side and the other misfits in my bed, I can rule as queen. I can finally have power over the person who had made it clear my worth was only in what someone was willing to pay.
And then it all came crashing down. My father might not be clever, but sometimes he gets lucky, and the prison that had become my sanctuary is now under threat. Kane is missing, the rest of my men are frantic to find him, and I’m still being hounded by the life I left behind.
James, Ariel, Phoenix, and Kane might seem like the harbingers of both doom and happily ever afters, but something tells me there’s still so much more story left until our fairytale reaches The End.

The Sins That Bind Us is the second book in an MFMMM, modern fractured fairy tale trilogy that tells the story of how heroes and villains might not always be what they seem. It features MF, MMF, and MM scenes, and ends on a cliffhanger.