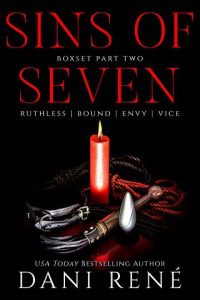 RUTHLESS:
“I’m an asshole. And I make no apologies for it.”
Callan doesn’t allow emotions like guilt, love, or empathy into his life. It’s how he’s always lived. But when the sweet Madison Parker breaks down his walls, he’s left with the need to finally allow someone in. But that could get them both killed.

BOUND:
“My life came with a vow. A promise to the blood line I’m born from.”
The vow Mason Gianetti made is coming back to haunt him. He needs to step up, but that would put Savannah in danger. Little does he know, his sweet girl has more secrets than he realized, and now, he may have to kill her.

ENVY:
“Seven Sins had nothing for me anymore. That is until she walked in.”
Asher wants to leave the world of Seven Sins, but there’s one thing holding him back, the girl from his dark and sordid past. Only, she doesn’t remember him.

VICE:
“I’m cruel. I’m cold. I’m heartless.”
Oliver Michaelson is cold and cruel. He closed himself off to love, but delves into the filthiest fantasies with both men and women. His tastes aren’t for everyone, but he may have just met his match.