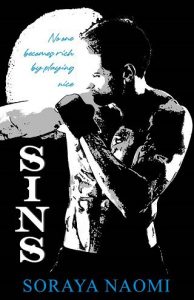 William Kade is a ruthless businessman who plays dirty. He titillates all women and is rejected by none.
An orphan who comes from nothing, William has built an empire from a gaming club and an illegal fight club with his best friend and mentor, Charles. However, when profits decline, Charles and William decide to open the first hardcore sex club in the U.S.

With plans in the works to expand that business, they’re forced to take drastic measures to secure enough cash to pay the gaming club debts. Drastic measures that involve Ivy, a woman William already has unfinished business with. A woman who might be the only female that equally annoys and intrigues him.
But when William and Ivy start playing a dangerous game, the stakes become higher with each passing day until no one can find a sane way out.