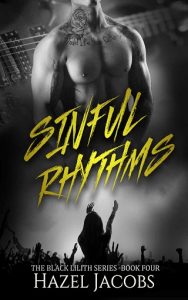 Tessa Hunt is a former English major and current barista who’s stuck working at Starbucks.
She’s got a huge family she loves, a pile of books in her ‘to be read’ pile, and a best friend she’s never met. D came into her life accidentally via an X-rated picture sent to the wrong number one late night five months ago, and the pair of them have been trading texts and secrets ever since.
When D invites her to finally meet at a rock concert, in person, because he has a job opportunity for her, she discovers that her hilarious dorky best friend D is the world-famous Dash Todd, from Black Lilith.
The job he’s lined up for her is shadowing Black Lilith for their Sinful Rhythms tour and writing an article about them for Rolling Stone! That’s the sort of thing that launches careers. But when Tessa tries to coax Dash into a more serious relationship, she realizes that things aren’t as easy as she thought they would be.
Dash makes her weak in knees, but he goes cold the moment she tries to get serious. After so many years of effortless sex with groupies, she can hardly blame him for wanting to avoid commitment.
When another man vies for Tessa’s attention, she needs to decide whether to pursue a relationship with someone who is actually interested or to wait for her rockstar best friend.