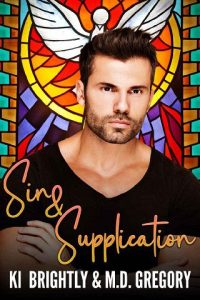 A Murderous Past
Father Gian Sabbatini is a priest who can’t outrun his sins, but he tries to avoid his family and their mob ties. He does all the good he can for the people of St. Loren, Louisiana, to make up for the criminal life he once led. Gian’s family loves to remind him that no matter how many people he helps, there is still blood on his hands, and on the money in the church coffers.

An Angel Who Needs a Rescue
Phoenix Crawford doesn’t know who he is anymore. Due to seven years of daily abuse, he only lives in the moment to focus on staying safe. After a fight with his partner, Phoenix is left homeless and has no idea how he will survive with no money and nowhere to go. Luckily he stumbles up the steps to St. Michael’s, and Gian offers to take him in after learning of his predicament.

Healing Devotion
Phoenix loves his new life and opens up to Gian, despite the mental health issues he is dealing with, and it doesn’t take long for Gian to consider leaving the priesthood because Phoenix makes him want a relationship. Kind and quietly helpful, Phoenix goes about his days assisting Gian at the church in between rebuilding his life. But Gian’s family catches up with him—the mob never lets a man go. As Phoenix delves into his repressed memories he needs more help than ever, but is Gian up to the task of keeping Phoenix safe? And what if the person Phoenix needs to be saved from is Gian?

Phoenix starts out in a bad relationship that leaves him in mental tatters, but he gets the support and love he needs from Gian. Against all odds, they have a happily ever after!