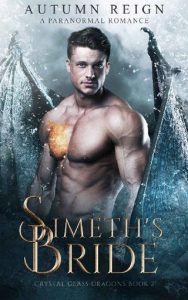 Simeth has never been told to wait. As he plans to lure and breed his fated mate, will he get more than he bargained for?

Simeth, a dragon shifter, must claim the throne his father did not—He must be first to breed. But his usual cool indifference won’t cut it with his fated mate, an outsider girl. They expect coffee dates, chitchat, feelings. He’d play the game only so far. Until she willingly entered his kingdom. But with her sweet, irresistible scent, can he fight the cravings coursing through his veins—can he resist taking a bite?

Mara didn’t believe in fairytales: ghosts, merfolk, lost kingdoms. Yet she had felt him. A raw charge pulsing through her—crackling in the air between them. And now she couldn’t look away: held, as if by gravity, to those unyielding green eyes, stacked muscles, and cheekbones as angled as his tailored suit. Was this some sort of spell? Was he who he said he was? She must uncover his true intentions before falling prey to her own desires.