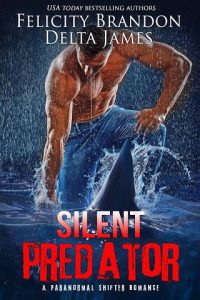 A predator prowls the Sea of Cortez, protecting a mystery that has been kept silent for almost a century—damning information that some are still willing to kill for.

Mason Lockheart is a highly decorated Navy SEAL with a mission that he can never reveal to anyone… even the curvy redhead who’s determined to bring everything up from the depths of the sea. Mason’s family has been part of a clandestine patrol since the USS Kracken went down. He has taken on a solemn duty to protect its final resting place and its covert mission.

Twenty years ago, Shiloh Whitaker’s mother was murdered to keep her from revealing what she knew. As a child, Shiloh watched as her mother’s killers got away, running from her home into the black of the night. Now later, she’s a celebrated marine biologist and treasure hunter, but her real calling is to find the Kracken and prove her mother’s suicide was anything but.

When Mason spots Shiloh’s submersible lurking in the dangerous waters around the Kracken, he tries to frighten her away. But Shiloh doesn’t scare so easily—even if the thing that sends her sub to the surface has rows and rows of razor -sharp teeth. Something about Shiloh calls to Mason in a way he’s never known before. Determined to pursue a passion he doesn’t truly understand while still upholding his oath, he follows Shiloh into a storm that could destroy them both.

When the truth is revealed, will Shiloh betray Mason and the Kracken, or will all of the secrets of his heart be safe with her?