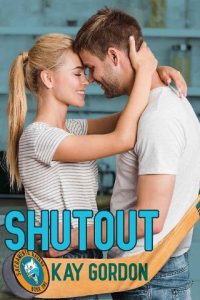 Theo “Axe” Axelsson was at the top of his game. He was promoted to starting goaltender, helped his team bring home the Stanley Cup, and even won the Vezina trophy.
And what did that get him? A move to Sacramento to join the NHL’s newest hockey team, the Ravage.
Now he has to find his groove with a brand new group of guys and is biding his time until he can be traded back to New York where he belongs. The new neighbor across the hall has the ability to mess up his plans, though. He can stop the pucks on the ice but he can’t seem to shutout Parker.
Parker Ward’s new job is almost everything she’s ever wanted. Being a top reporter for a professional sports team is her dream and when she’s given the opportunity to join the newest hockey team, she takes it. Sure, she knows nothing about hockey and would rather be covering a football team, but this job is something she can’t pass up.
The surly neighbor across the hall wasn’t something she was anticipating, though. She can read people easily but she has a hard time figuring out Theo.
Theo is closed off and assumes the worst about people. Parker is outgoing and sees the good is most things. Theo isn’t planning on staying in Sacramento and Parker isn’t sure where she’s going to end up.
Knowing that isn’t enough to stop the two from being drawn to each other, but is it enough to keep either of them from getting hurt when the season is all over?
Watch as these two opposites collide in a flurry of hockey pucks and Princess Bride quotes– all while trying desperately not to fall in love.