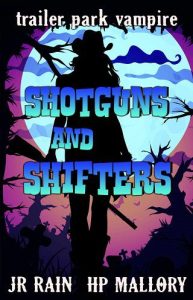 The day the red fog rolled in, everything in Windy Ridge changed.

Neighbors and friends I’d grown up with got turned into wolfmen, lizardmen, gargoyles, and other unmentionables.
As for me? I got turned into a vampire.
Most folk thought the rapture was upon us but soon it was fairly obvious that we weren’t playing witness to some holy event. In fact, I was fairly sure we’d just witnessed something mostly unholy.
Regardless, life in our little town in the middle of the Ozarks returned to what passed for normal.
Until two human outsiders rolled into town.
Because I was one of few residents who still appeared human, I was responsible for making sure the town went into hiding until them humans moved right on out again.
But what I wasn’t planning on was the fact that one of the strangers was none other than Dean Hawke, a man I hadn’t seen in twenty-three years—a man who also happened to be my high-school sweetheart.
But wait. There’s more…
Not only had my ex-boyfriend walked right back into my sorry life, but he was also the newly appointed ‘Sheriff of Windy Ridge’—and his first assignment was investigating accounts of a naked man who was terrorizing locals.
Now if that weren’t enough to ruin a vamp’s day, Sheriff Dean Hawke had, like George Clooney, only gotten better with age, and I was pretty sure all those real deep looks he kept giving me had their own kind of meaning.
But between trying to keep the town’s secret under wraps, spearheading my own investigation into the naked man with a bunch of hillbilly monster chasers, working my shift as a waitress at the local diner, and trying to smother my ardor for a certain human sheriff, I’m thinking life might be easier if I packed up my daughter and caught the next train to Transylvania, leaving Windy Ridge far, far behind.